Håkon Gullvåg has devoted most of his artistic practice to painting, and since the early 1980s, is one of Norway’s most well known painters. His versatile and extensive production necessitates treating his paintings thematically, in separate texts. This text will primarily focus on Gullvåg’s “free” paintings. His portraits, decorative commissions and book-projects are discussed in individual entries (see menu).

Gullvåg’s career as a painter started at twelve years old, when he found his grandfather’s paint box in the attic. His grandfather had been an ambitious hobby painter, and although his death was prior to Gullvåg’s birth, it was still possible to squeeze pigments from the old tubes. Noticing their son’s great enthusiasm, his parents bought him fresh oil paint.

Through the years Gullvåg has experimented boldly in different directions, both within figuration and abstraction, towards the non-figurative work. Meanwhile, a general, common feature is that his art is based upon a well-developed talent for drawing, as well as a solid, classical foundation. Gullvåg seeks a considerable degree of inspiration from abroad, and has completed a series of longer study-tours and work-sojourns, among others, to Stockholm, London, Paris, Berlin, Madrid, Nice and Rome.

Many of the themes found in his art recur, even unto today. The works often have references to his childhood, to art history’s masters and to artistic genres, film and literature, as well as current events. These references are frequently woven together so as to establish different levels of reality saturated with symbols – something that contributes to the mysterious ambiguity of his works.

In the weeks leading up to the opening of an exhibition Gullvåg’s studios are practically “clothed” with paintings. The pictures are painted simultaneously and in several turns; one finds therefore echoes of other pictures in each individual work, something that makes then harmonize well together in the context of an exhibition. A characteristic sight just before an exhibition opens is Gullvåg standing in front of the pictures with his paintbrush and pallet, making last-minute adjustments. 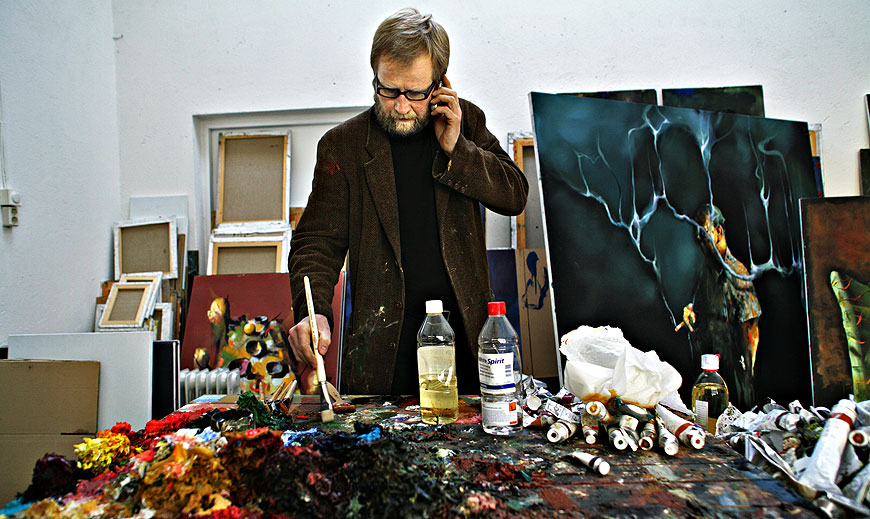